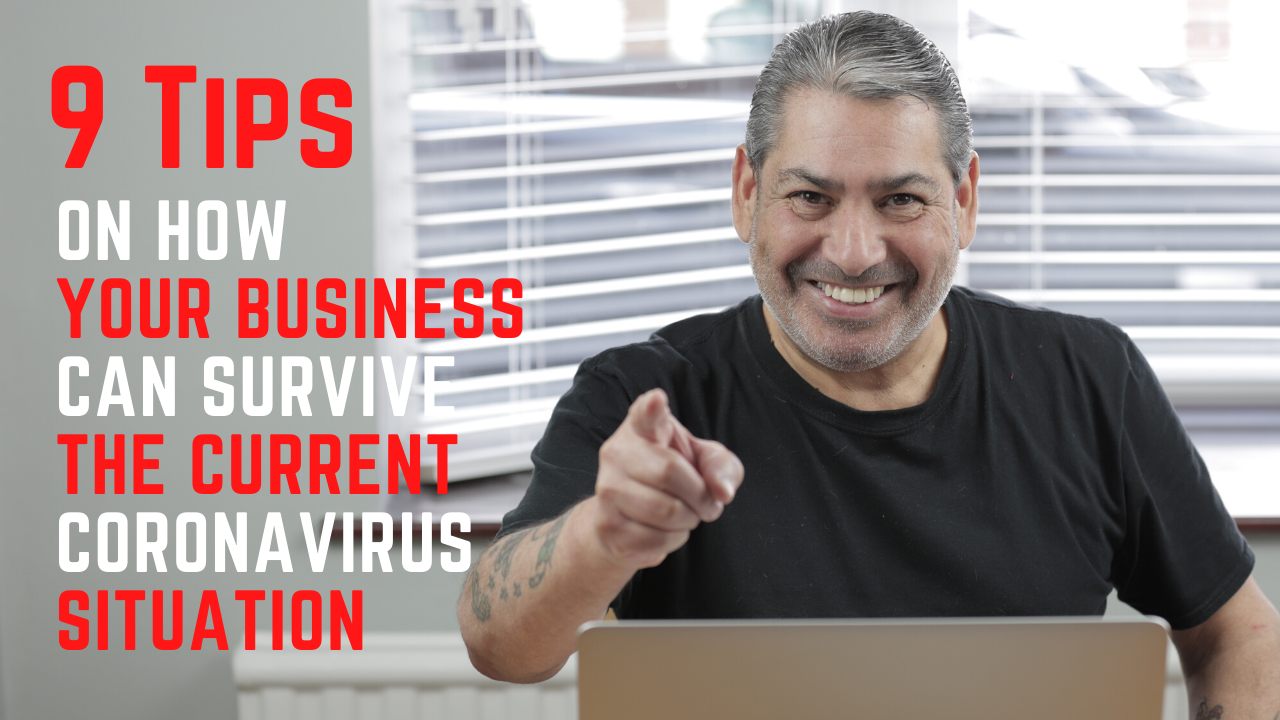 The current coronavirus situation has been devastating for a lot of businesses with courses and jobs cancelled with no short term solution.

Many business owners are very worried that their businesses may not survive the Governments twelve-week period of ‘social distancing’ and ‘self-isolation’ ….. but, there are opportunities that you can take advantage of if you apply yourself and think differently to those who are panicking.

And these are my 9 Tips on How Your Business Can Survive The Conornavirus Situation.

And we’ve all seen the ‘apocalyptic panic buying’ that has been happening with scared and selfish people taking far more than they need and leaving hardly anything at all for others, and I’ll come back to this point from a business perspective a bit later.

In a BBC documentary he says:

“You can only control how you perform when the gun goes off”.

The coronavirus situation is something we can’t control (apart from taking our own personal precautions against it).

The fact that courses and jobs are being cancelled is outside of our control.

But what we can control is what we choose to do about it.

2: Always Have A Strategy and Stick to It

Ray Arcel was an American boxing trainer who was active from the 1920s through the 1980s who trained 20 world champions.

When training Roberto Duran (one of the greatest boxers the world has ever seen). He told Duran:

“There’s technique and there’s strategy. Technique is your every move, your every punch. It covers all of your short-term decisions. Strategy is your plan for the whole fight. It’s your long term. It defines how you apply the technique to achieve your major goal.

It’s ok if your technique fails for a bit, as long as you’re following the strategy”.

The current situation is a ‘technical issue’ (so to speak). It’s what you do day to day to make a living.

Your strategy is your long term plan. It’s requires long-term thinking to allow you and your business to survive.

Now I’m going to be sixty-years old this year and I’ve been here before.

Deborah and I started our business thirty years ago in 1990 and we were selling training courses.

One thing that is first to go in a crisis is training and that (as every business study will show) is detrimental to long term success. So you need to do the opposite, because that is exactly what successful people do.

Warren Buffett, possibly the world’s greatest investor, when constantly asked for his advice as to

“what is the best thing to invest in” he always replies: “You! Invest in yourself”.

When I decided to start this business I had made some bad business decisions and I had got myself (and my family) into eight-thousand pounds worth of debt.

The future looked very bleak. The bank refused to lend me any more money against our business and wanted to foreclose on our mortgage and make me bankrupt.

So I needed a new strategy – and quickly.

It was then that I took the bold (and some would say stupid) decision to borrow £10,000 from three different banks (because in those days you could borrow up to £10K for a personal loan with no security required) to make the business work.

But I had a different strategy.

Instead of chasing people down and trying to sell them something (pressure selling) I changed the focus my business on generating a constant supply of quality leads who I could solve problems for and that I could build relationships with, with a view to them becoming customers at some point. And the beauty of this strategy is that if you do that the lifetime value of your customer is far greater than the single sale that you would have chased them down for in the first place.

Every business needs a continual supply of leads (prospects) and customers (prospects who buy).

So one thing you can do is up your lead generation activity – you have absolute control of that, and with people working from home or self-isolating, you have a ‘captured audience’!

7. Don’t Do What Everyone Else is Doing – Be Different!

From browsing through social media I can see people desperately trying to sell their services online in the hope that they can make enough money to survive the short-term crisis situation.

But that won’t work, at least not in the way they are doing it, and the reason is the majority of people are worried. They are worried about how they will survive the cornoavirus situation.

They are worried about their jobs because so many people are being laid off from work, so asking them to buy something right now is probably not going to work ……. unless you do it right.

So, like the ‘apocalyptic panic buying’ people I mentioned at the beginning of this post we are starting to see a trend in some people ‘painc-selling’ in a hope that they will get enough business in to survive this crisis.

And I get that, and I understand people’s worries and concerns, but that isn’t the best tactic.

Now there is one thing you can control and that is what you choose to focus on and what I am doing right now is upping my game on lead generation and conversions so that when this period of uncertainty and panic is over, I’ll have a large crowd of people ready to buy what I am offering.

Now if you have heard me speak before, you will know that I am an avid reader and I always advise those people who wish to aspire to be great at what they do to read at least three books a week on a subject related to their passion or business.

That simple step sets you apart from your competition.

Books are great and greatly underestimated because it is an opportunity for you to learn from someone for far less than it would cost you to have them come and personally train you.

Books leave footprints of someone’s journey so if you want to learn how the great achievers achieve greatness, read their book!

I know. It’s simply really, but ninety-three percent of people will not do even that! Don’t fall into that group!

So my long term strategy will way out perform this short term crisis.

9. Learn ‘Traffic Secrets’ From People Who Have Used Them To Build Multi-Million Dollar Businesses

Now one resource I’ve just invested in (for Free + shipping) is a book called ‘Traffic Secrets‘ by Russell Brunson.

This book lays out the traffic secrets that took Russell from a start up business to a multi-million pound business in just five years, without any borrowing or venture capital investment.

Now I know that Russell paid over $1 Million for the rights to this book, because the guy behind the strategy laid out in this book was the first person to make $1 Million in one single day and to top that, that was during a hurricane!

When I heard that Russell was launching the book I put my name down on the waiting list and as soon as it became available I ordered mine, which is being shipped to me as I write this, but to get ahead of the curve I also purchased the audio mp3 of the book which is offered an addition purchase option.

There are also other bonuses that Russell is offering you when you request a copy of his book and, as usual, Russell massively over-delivers on value which is why I tend to purchase virtually everything he puts out.

So, if you want to do something productive, get a copy of his Free book ‘Traffic Secrets‘ before they all sell out.

That way you can start scaling your business during this period using proven and tested lead generation methods that are exactly the same as the one Russell used to grow his business from zero to a multi-million dollar business in under five years. 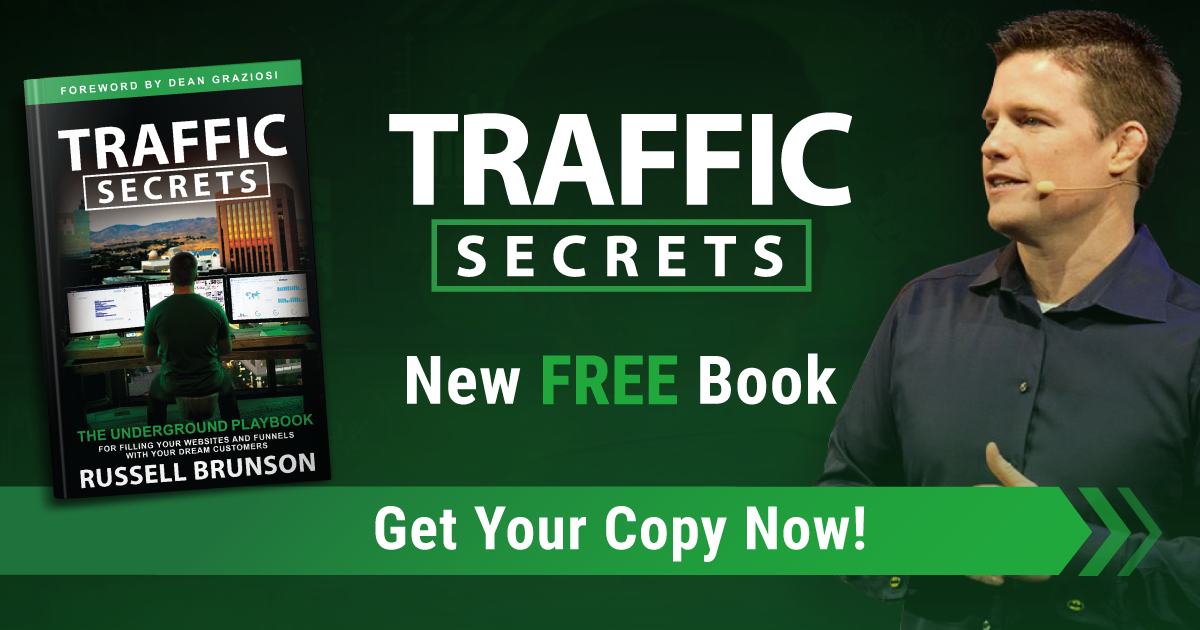