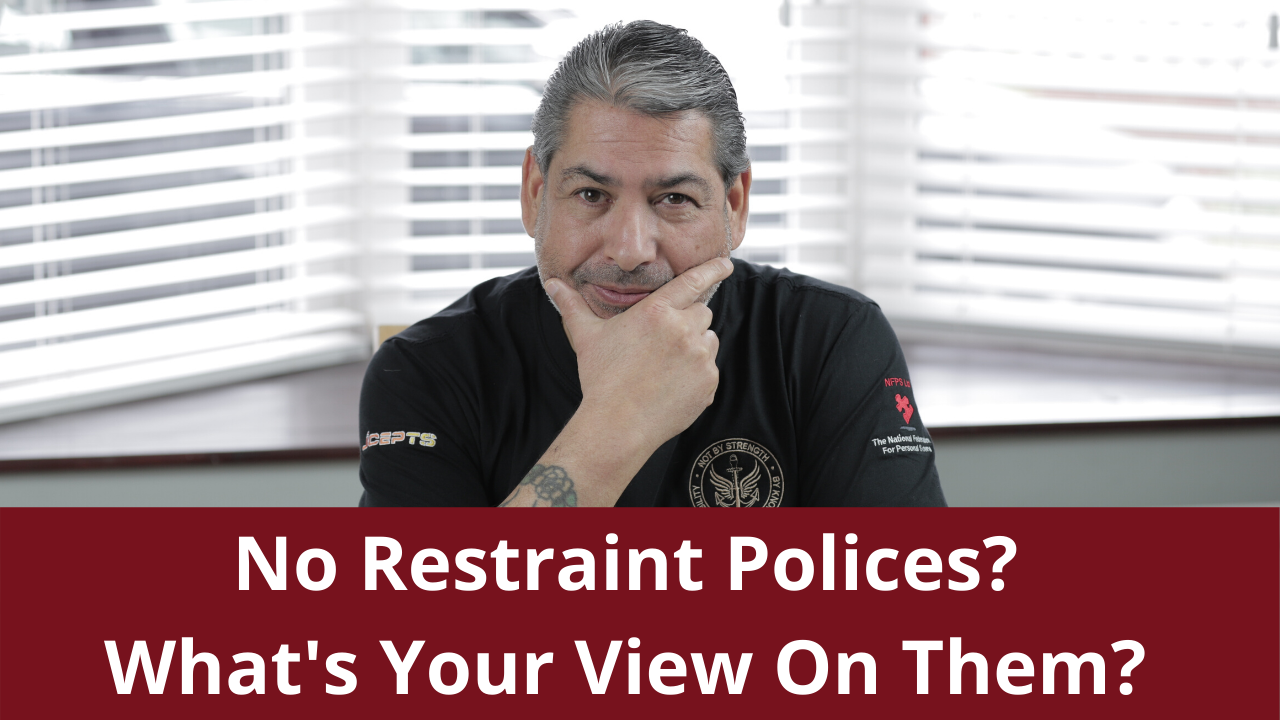 Every now and then I come across an agency/organisation that has a ‘no-restraint’ policy in place and my first question is always, why do you have a policy for something that you don’t need to do?

You wouldn’t have a ‘no-hard hat’ policy in a school playground during playtime because there is no foreseeable risk of something falling from the sky and landing on a child or teachers head during playtime therefore the risk is so low nothing needs to be done about it.

And in a care home or hospital you wouldn’t have a ‘no hitting people over the head with a fire extinguisher’ policy (and I may explain why I’ve used that as an example in a later post another time), because generally speaking the risk of that happening is so low; as is something falling from the sky and hitting a pupil or a teacher on the head in the ‘no hard hat’ policy example above, so no policy would be required for it.

So, what do staff do if they are confronted with a service user (and for service user also read: patient, resident, etc) who becomes aggressive and violent towards them?

But is it really the police’s responsibility to deal with it? Yes, the police are responsible for the protection of people and property, the preservation of the peace, and the prevention and detection of criminal offences, but should they be called to attend because an organisation has a ‘no-restraint policy?

One reason that I have found is that the agency doesn’t want to pay to have their staff trained to restrain, so they adopt a ‘no restraint policy ‘to ensure staff don’t restrain, for fear of being disciplined by their employer if they do.

But is this because the agency doesn’t have the money to pay for training?

According to the Department for Education the average cost of placements per child per week is £2,964 in Local Authority Homes and £2,907 in private/voluntary homes and a BBC News item in 2016 stated that it cost £3,000 a week to accommodate a child in a care home, which is three times the cost of sending a child to Eton! The news item also said: “One brochure, promised an annual profit of £214,000 on a four-bedroom home with a 75% occupancy, rising to £625,000 if it were full, despite the outcomes for children in such homes being “not great”.

These organisations, therefore, cannot argue that the reason is lack of money, especially when “a private equity firm saying it could guarantee “an 18% return” on investment in certain children’s homes”.

So why do they have no-restraint policies?

Another reason I have come across is that the agency/organisation is concerned about any liability that might arise out of their staff using physical force, so they put a ‘no restraint policy’ in place to ensure staff don’t restrain to avoid any unnecessary harm that may occur that the organisation could be held liable for.

But that invoked the law of ‘Unintended Consequences’ where the collateral fallout from trying to avoid liability actually (in certain circumstances) only serves to increase it.

For example, if an organisation has a no-restraint policy in place, but there is evidence (which should be found in a service users behavioural care plan) that a service user is foreseeably likely to act aggressively, then the organisation is actually breaching it’s duty of care owed to the staff and to the service user if that behaviour is not managed safely and a harm, injury of fatality occurs as a result.

This was evident in the case of Olaseni Lewis who died after being restrained by police officers who were called because the nursing/medical staff at the hospital didn’t feel that they had the appropriate level of training needed to restrain him.

So, is relying on the police the best thing for an organisation to promote? I don’t think so. Police officers will not know your service user either at all or definitely not as well as the staff will, and the police arrest and restraint skills are designed for controlling violent criminals, not vulnerable people per se.

What about the liability of the organisation if they do not train staff, where there is a foreseeable risk that could be managed by properly trained staff?

Well apart from being prosecuted for any breaches of Health & Safety legislation (as mentioned in the above paragraphs) the organisation could face prosecution under The Criminal Justice and Courts Act 2015, which states: “It is an offence for an individual who has the care of another individual by virtue of being a care worker to ill-treat or wilfully to neglect that individual.“

A ‘care worker’ is defined by section 20(3) as: an individual who, as paid work, provides:

It also includes an individual who, as paid work, supervises or manages individuals providing such care or is a director or similar officer of an organisation which provides such care.

They may also be in potential breach of other Regulations of The Health and Social Care Act 2008 (Regulated Activities) Regulations 2014, which state:

And if a death were to occur that could have been prevented by staff being given the right degree of training then there is the potential for prosecution for breach of Article 2(1) of the Human Rights Act 1998 and The Corporate Manslaughter and Corporate Homicide Act 2007.

In short, if they are aware of a service users’ behaviour and they fail to adequately deal with it and are hiding behind a ‘no-restraint policy’, then they are breaching a whole raft of laws and (in my opinion) leaving themselves wide open to the risk of prosecution.