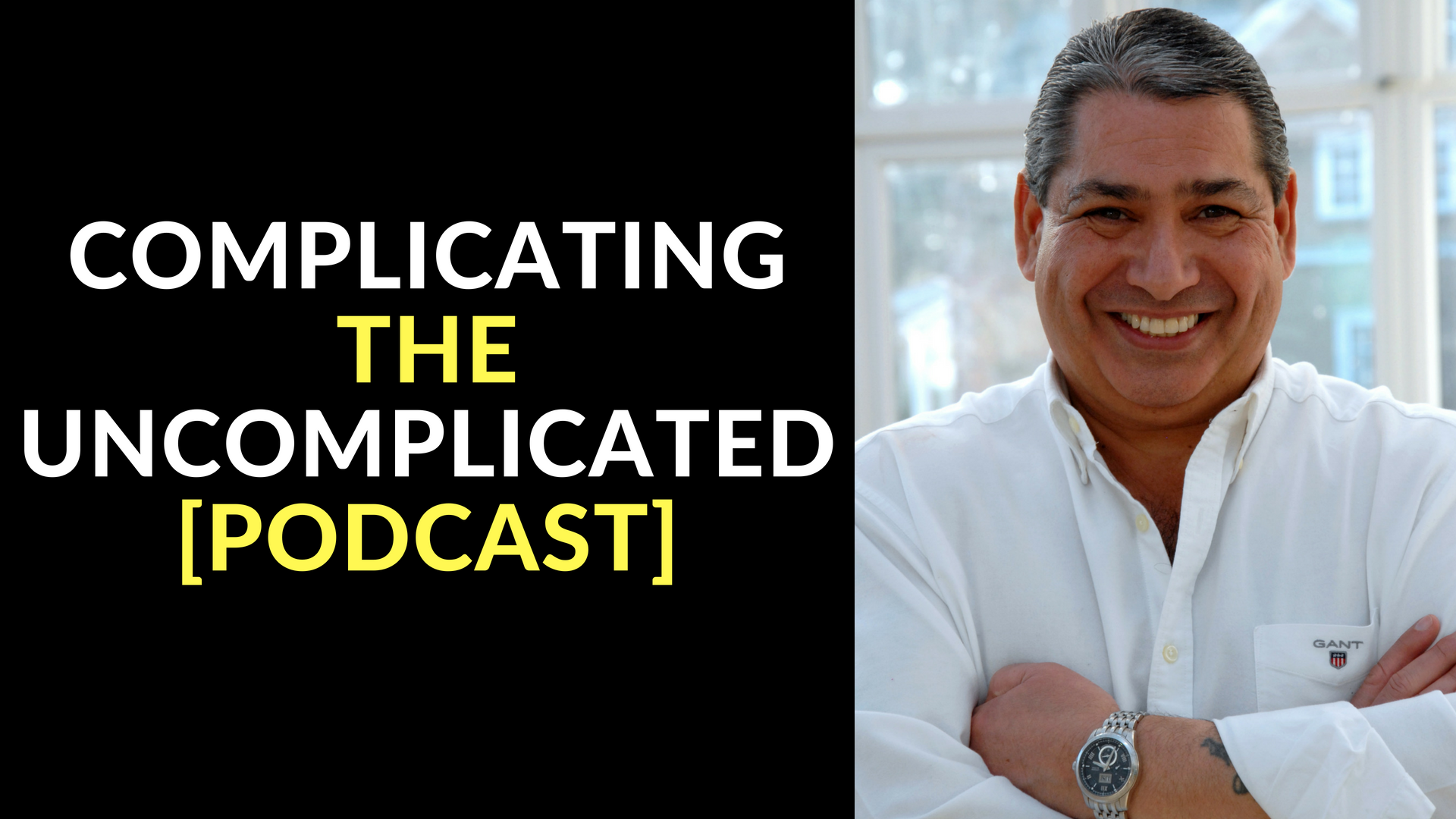 Today in many physical restraint/physical intervention and disengagement/breakaway systems, many techniques are taught in a way that seems designed to ‘complicate the uncomplicated’.

And what I mean by that is a system of teaching is employed that breaks the technique down into each component part which is then taught within a complex system of instruction making it hard for the learner to learn, remember and recall the techniques when needed, especially when put under pressure.

For example, if I wanted to teach someone how to teach other people to shake another person’s hand I would simply ‘shake their hand’ and then ask them to teach that to someone else, and they would easily be able to do it without any problem whatsoever. This is because the process of a ‘handshake’ is a fluid process.

But what if we broke that fluid process down in the same way some trainers break down a physical technique?

The simple answer is it would complicate an uncomplicated process, and, believe it or not, that is the same way a hypnotherapist hypnotises people.

What a hypnotist does is use what is referred to as a ‘pattern break’ to create momentary confusion so that a hypnotic subject becomes more subjective to the hypnotists commands, following them without question, thus allowing the hypnotist to put the subject into a trance quickly to do whatever the hypnotist asks of them whilst making the subject believe that what they are doing is real, no matter how bizarre the actions asked of them are – and trust me I know – I’m a qualified cognitive hypnotherapist.

Hang on! If a physical restraint/physical intervention and disengagement/breakaway trainer ‘breaks a technique down’ then they are basically creating ‘pattern breaks’ in what would otherwise be a fluid process.

This not only creates confusion in the learner but also makes the learner more subjective to the trainers’ instructions which they then accept and follow without question, to the extent that they will accept whatever the trainer is saying to be true.

This is how trainers get away with teaching poor quality techniques to people who are basically (in some cases) more educated, qualified and (in some cases) intelligent than the trainer.

I call it ‘hypnotic bullying’.

Occam’s Razor – “Entities are not to be multiplied without necessity”

William of Ockham was an English Franciscan friar, scholastic philosopher and theologian, who is believed to have been born in Ockham, a small village in Surrey in the 14th Century.

He is commonly known for Occam’s razor, the methodological principle that bears his name.

However, the origins of what has come to be known as Occam’s razor can be traced back through many eminent philosophers through the centuries, including Aristotle (384–322 BC) who wrote “Nature operates in the shortest way possible.”

What Occam’s razor states is that “all things being equal, simpler explanations are generally better than more complex ones”.

Ernst Mach And The Principle of Economy

Ernst Mach was an Austrian physicist and philosopher, noted for his contributions to physics such as study of shock waves (the ‘Mach’ number in relation to speed is named in his honour).

He [Mach] formulated the stronger version of Occam’s razor into physics, which he called the Principle of Economy stating: “Scientists must use the simplest means of arriving at their results and exclude everything not perceived by the senses.”

Penal Theory And The Philosophy of Punishment

In penal theory and the philosophy of punishment, it states that any punishment greater than is required to achieve its end is unjust. The concept is related but not identical to the legal concept of proportionality.

Tested in Every Field of Endeavour

Occam’s razor has been applied and tested in virtually every field of endeavour including, religion, biology, physics, science and mathematics, all with the same conclusion – the simplest solution tends to be the right one.

How Does This Apply to Teaching Physical Skill Techniques?

If we take Occam’s razor and apply it to the teaching and application of physical skills techniques, be they restraint, disengagement or self-defence, what we must take away from what has been tried, tested and proved over the centuries is that, the simplest method is the most effective way of allowing someone to learn, remember and recall a technique.

And there is lots of other research to support this.

In 1952 the psychologist E.R.Guthrie proposed a definition of “skill”, which “consists of the ability to bring about some end result with: maximum certainty of goal achievement, minimum energy expenditure and minimum movement time.

In 1993 Joe Ferrea conducted a simple study based on Hick’s Law.

He measured the reaction time of a single block to a punch at 0.183 milliseconds.

When he increased the number of blocks to the strike from one to four, reaction time increased to 0.481 milliseconds.

This equates to an increase in response time of 263% – which means people became nearly 300% slower!

So, if we complicate something we reduce the ability for them to be able to do the skill with ‘maximum certainty’, we increase the individuals’ energy expenditure, increase the number of moves they have got remember, which in turn increases the person’s cognitive workload and slows down a person’s reaction time.

Research into the different types of skill classification have concluded that gross motor skills (skills that involve the action or large muscle groups and with a low cognitive dependency) work better in situations of high emotional arousal.

And what this means is that when an individuals’ cognitive workload increases, their decision-making can be compromised.

Why Do Staff Require Training?

Let’s also consider why staff are given physical restraint/physical intervention and disengagement/breakaway training.

The reason is simple. It is because they are expected to deal with situations of verbal abuse, conflict, aggression and physical violence.

And that causes staff to have increased levels of distress and become anxious and fearful.

The American Diagnostic and Statistical Manual of Mental Disorders (DSM) (The Bible of Psychiatry and Psychology), states that: “Anytime the causal factor of a stressor is human in nature, the degree of trauma is usually more sever and long lasting”

What that means is that when it is another human being that causes our fear, pain and suffering, it literally shatters, destroys and devastates us.

And to compare this we can look at the research done by Lt. Col Dave Grossman in his ground-breaking research into the ‘The Universal Human Phobia’.

He has found that when human beings are confronted with a snake, roughly 15% of human being will have a phobic reaction to the snake.

But when confronted with another human being who is aggressive and violent over 85% will have a phobic reaction to that experience.

So when staff in organisations are being given training to deal with violence and aggression there is the foreseeable expectation that staff are likely to encounter it, with (according to Grossman’s research) an 85% chance that they will be traumatised by it.

However, providing staff with training that is highly likely to fail, increases the probability that those staff will be negatively affected when they encounter aggression and violence.

Complicating an un-complicated process increases the risk of injury, trauma and potential death.

Any training provider delivering a system of physical restraint/physical intervention and disengagement/breakaway training, which is based on a complicated system of instruction increases the margin for error.

And that means the training system is designed with failure built in.

Yet today, in the 21st Century, we still have training providers rolling out the same old style teaching programmes (some developed as far back as the 1970’s and 80’s) which are still teaching staff skills based on fine and complex movement combinations, which are very probably likely to fail in situations of high emotional arousal.

An example of this is a member of staff who is confronted with a patient, service user or member of the public exhibiting high levels of aggression and the risk of physical violence who can’t remember the technique taught to them on a training session six months ago (sound familiar to some of you?).

So how and why are these ‘failed’ systems allowed to exist and why do companies still use training providers that teach them?

Well I have an opinion on this, and this is my own personal opinion, but my opinion is also the opinion of someone who has worked in this industry for almost thirty years in an operational and training capacity, in virtually every industry sector, who has provided expert witness reports and evidence in court on the use of force and a former health and safety representative of a Home Office department (by the way none of this is meant to impress you but to impress upon you objectively what my opinion is based on).

Firstly I know that many companies do not do their own due diligence into this area properly.

But I also think that there is a darker side to this too, which I find unethical, immoral and underhanded, and that is what my real issue is.

My opinion is that when the technique fails (because it is either too complex in design or has been taught as part of a complicated instructional process in a low-stress environment) and someone gets hurt or killed in a high-stress environment where fear and anger exist, it is easy for the finger to be pointed at the member of staff by the company and training provider and for then to say that the reason someone got injured or killed was because the member of staff ‘failed’ to do the technique properly.

So, in short, the member of staff is ‘blamed’ because they couldn’t recall how a technique that was designed to fail from the start.

And as a final note, I’d like to highlight to you a phrase that (if you hear it) proves the theory that the training provider is teaching a complex set of techniques as part of a complex training system.

“The learners need longer courses because then need to have more time to practice the techniques so that they can do them properly”.

Re-phrased that sentence means “I’m going to teach your staff a complex way of learning the techniques within a protracted and complex system of instruction which makes it difficult for them to remember and recall the techniques”.

That is the perverse dichotomy!

If you would like to train with us then check out our BTEC level 3 Restraint Instructor Award Course page here – https://nfps.info/physical-intervention-trainer-course/