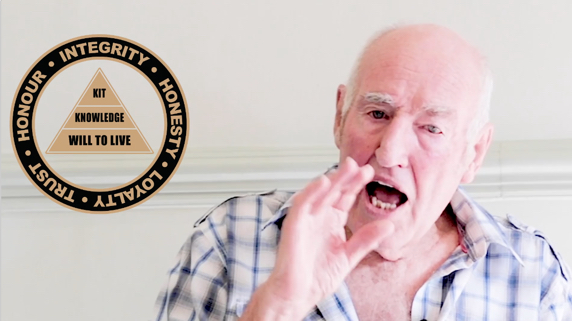 On the recent course with Ginge and Lofty, Lofty taught the concept of the ‘Pyramid of Learning’ and it’s application in his role as a SAS soldier.

The concept Lofty described is as follows.

At the base of the pyramid is the ‘Will To Live’ and from an SAS (Special Air Service Regiment) perspective that ‘Will To Live’ is the firm foundation from which they build all of their training on. Lofty goes on to say that “we are never subject to something on earth that we cannot deal with. At times it will be unpleasant, difficult and downright hard, but as long as we don’t give in we will succeed. So you never give in regardless of the circumstances”. Lofty goes on to say that his will to live must be greater than that of his adversaries. “they are not going to win”.

For SAS troopers the will to live gives them the ability to have the drive to survive, operate and fight in hostile areas, sometimes against immense odds, where possibly many others would fail. That’s what sets them apart.

But what about everyday people. Well, the same principle can be applied to business people, entrepreneurs, and employed people. In fact it applies in virtually every aspect of everyone’s life, because at times many people just want to give up.

Things get on top of them and they can’t see a way out of the hole they are in and it feels like they have a mountain to climb.

Many years ago I was eighty-thousand pounds in debt. The bank was going to repossess my property and make my family and I homeless. Everyone told me to declare bankruptcy and (basically) give up. And believe me, I really felt like doing it.

But I come from an old-school mind set where men are the providers. So apart from feeling like I had failed as a man (because I had got my family into this position) I had two choices, give up or fight it, and I was never going to give up, which basically left me only one choice. And today, I am living the benefit of that choice because I learned that no matter what happens, you can overcome it if you really put your mind to it and commit to it one-thousand percent. 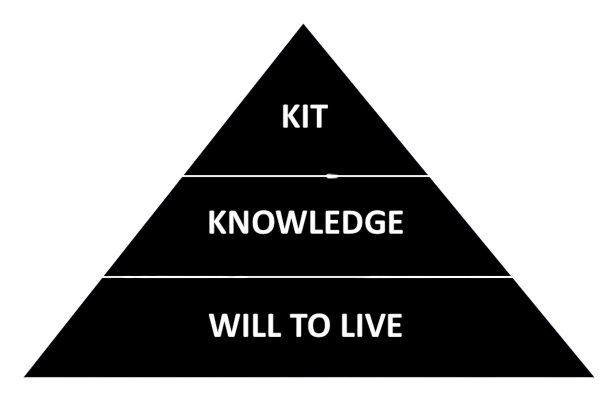 The ‘Will To Live’ is the foundation drive that sets the successful apart from those who give up. So (as Lofty always says) “Never Give Up”, and that’s why I could listen to his talk every day.

The next level is ‘Knowledge’.

‘Knowledge Dispels Fear’ (the motto of the Parachute Training Wing) means that you should always continue learning, because learning helps you grow mentally and even physically. It helps you acquire knowledge and knowledge combined with the will to live (as Lofty points out) helps you become the best at what you do.

“Practice what you are bad at” is something Lofty always says because if you only practice what you are good at you’ll only get better at staff you are already good at. The real challenge is in figuring out what you are not so good at and learn and educate yourself until your weakness becomes another strength.

This is as true for airborne soldiers training as it is for everyday life and especially people in business.

If you are no good at marketing, learn from the best and practice it until you become good at it.

In my career I know of lots of brilliant people who are phenomenal at martial arts and self-defence/self-protection. They know lots of techniques and would love to turn their passion for what they love into their full time occupation, but (and here’s the problem) they only practice what they are ‘good at’.

What they should be learning are business skills like marketing (the most important skill) and product development, but they don’t do that because they’ve probably never thought of doing it and so they are not very good at it.

The solution – ‘Practice What You Are Bad At’ – until you become good at it!

If you do all of the above that will help you develop courage and eliminate fear, and that allows you to have the courage of your convictions, which means that you can start living life on your terms and become anything you want.

The tip of the pyramid of learning is ‘Kit and Equipment’, and when Lofty talks about this he says that you shouldn’t rely on too many ‘resources’ but instead be ‘resourceful’.

Today in business I see too many people rely on too much technology and jump on the next ‘get rich quick’ idea hoping that it will solve their money problems.

They invest in gadgets and ‘bots’ and software (and don’t get me wrong some of this stuff can make you much more efficient) but they never learn how to use it properly before moving onto the next gadget.

On the course I asked Lofty to talk about not being able to use a compass on SAS selection and he tells the story that when he arrived for SAS selection he was given a compass and a map. But never having seen or used a compass before he put it at the bottom of his pack and his map when in his pocket because he also didn’t know how to read a map (yes this is true).

During selection Lofty just followed everyone, and although Lofty was very fit he couldn’t figure out how others (less fit than he was) managed to beat him to each RV (rendezvous point).

In short, they could map read and use a compass and he couldn’t. So he quickly learned and adapted his knowledge of how to read a map (whilst on selection) so he could navigate his way as opposed to just following others, because he realised that being able to use a compass and map read (using equipment) saves energy, makes more efficient use of your time and it ultimately made his life easier.

So what equipment do you need to learn that will make your life easier?

What knowledge do you require to turn what you are bad at into something you are good at?

I’ve videod Lofty’s talk and it is brilliant and I’ve made it available to everyone who attended the course last week.

And if you are attending the next 2 x day BTEC Level 3 Self-Defence Instructor Award Course on the 4th and 5th April you will get to hear Lofty give his talk in person, you can get a signed copy of his book, and you’ll also get access to the video of his talk as well (along with all of the other bonuses we’re giving away too).