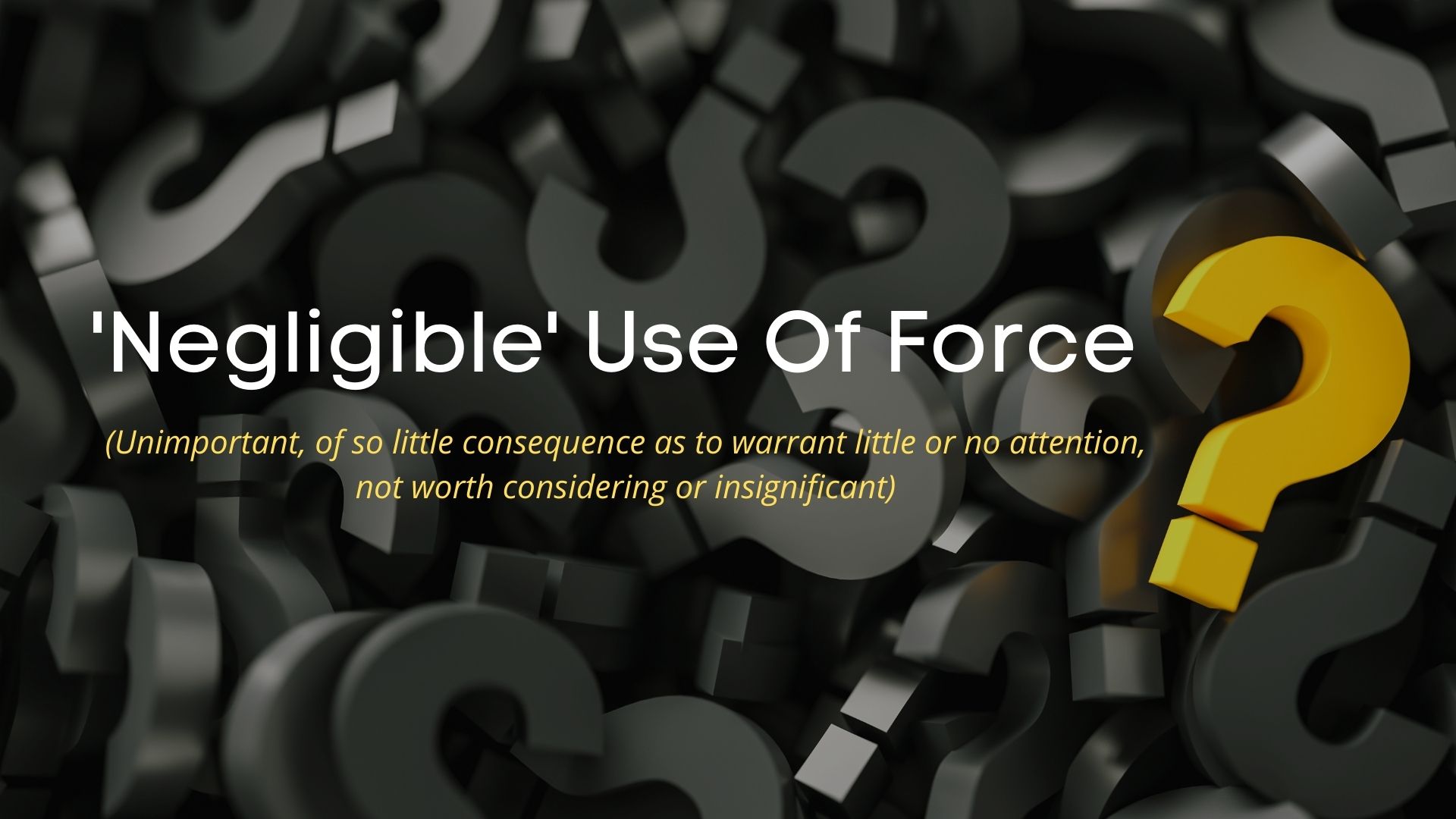 The Negligible Use of Force

There is a post on Linkedin that starts with the sentence “Did you know that the 2018 Mental Health Units Act (AKA Seni’s Law) permits ‘negligible’ force?”

However, that sentence is not exactly true as the following comment shows from Eric Baskind who is a senior lecturer of law and an esteemed expert witness:

What I would just like to add (in case anyone wasn’t aware) the Section 6 of the 2018 Mental Health Units Act is still “Prospective” (as are many other parts of the Act).

This means that it is not enacted (not currently law) and this won’t happen until guidance has been issued from the Secretary of State for Health (which is now nearly three years in the waiting).

So at the moment the issue of ‘negligible use of force’ is, by definition, negligible in itself.

And if we look at the various definitions of ‘negligible’ (as provided by numerous dictionaries), we can see that it means: “so small or unimportant or of so little consequence as to warrant little or no attention, not worth considering or insignificant.”

Therefore, why would you need to ‘permit’ or ‘record’ something that is so insignificant and of so little importance that it would make no difference whatsoever?

But even if it was, why would there be a need to ‘permit or ‘report’ anything that is ‘negligible’, because by definition it would be so immaterial and of so little importance that it would make no difference anyway?

The Argument For Reporting

Now there are some who will argue that even a small or negligible use of force needs to be reported and recorded at least in some form by the agency providing care.

This argument will be on the basis that it would provide important information that could go some way to reducing any future use of force interaction.

However, if staff are physically interacting with patients/service users as part of their normal day to day healthcare requirements, there should be no need to over-burden them with having to report any physical interaction that doesn’t require the use of force within the context of any challenging, aggressive and violent behaviour.

We also need to be clear on what the 2018 Act refer to with regards to the use of force.

“References to “use of force” are to—
(a) the use of physical, mechanical or chemical restraint on a patient, or
(b) the isolation of a patient.”

And these are further defined in section 1.7, where it states:

“physical restraint” means the use of physical contact which is intended to prevent, restrict or subdue movement of any part of the patient’s body;

“mechanical restraint” means the use of a device which—

(a) is intended to prevent, restrict or subdue movement of any part of the patient’s body, and
(b) is for the primary purpose of behavioural control;

“chemical restraint” means the use of medication which is intended to prevent, restrict or subdue movement of any part of the patient’s body;

“isolation” means any seclusion or segregation that is imposed on a patient.”

And the only time that any of the above could be legally justified in it’s use would be to prevent harm to a patient, harm to others and/or serious damage to property.

The problem seems to be is that some people are confusing use of force incidents with day to day physical interaction, which can create a lot more unnecessary reporting.

For example, if we looked at this from a purely health and safety perspective for a moment we know that if something has ben identified as a high or medium risk then action must be taken to reduce or eliminate that risk.

But if something is classified as a low risk, then no action needs to be taken whatsoever.

So if we transpose that methodology over why would anyone or any agency be expected to justify or report any negligible interaction?

And all of the above is negligible because (as stated earlier) the sections of the Act that refer to it are still ‘Prospective’, which means that they are not currently enacted law and will not be so until guidance has been published by the Secretary of State.

Until then there is no point creating an unnecessary and disproportionate amount of work for yourself with regards to something that isn’t required.

And if you’d like to train with a training provider who will definitely not create more unnecessry work for you then go to this web-page and complete the form to arrange a strategy call with me – https://nfps.info/physical-intervention-trainer-course/

It may save you a lot of time and money!